Static Electricity can be regarded as an imbalance in electrical charge. This imbalance occurs when an atom (or molecule) gains or loses an electron. Normally the atom is in equilibrium with the same number of positive protons in the middle of the atom as electrons. Electrons move easily from one atom to another. They form positive ions (where an electron is missing) or negative ions (a single electron, or an atom with an extra electron). When this imbalance occurs it is called static electricity.

An electron has an electric charge of (-) 1.6 x 10-19 Coulombs. A proton has the same charge with a positive polarity. The static charge in Coulombs is directly proportional to the surplus or deficit of electrons i.e. the number of imbalanced ions. The Coulomb is the basic unit of electrical charge which represents the surplus or deficit of electrons. (An ampere of current is the movement of 1 Coulomb of charge per second).

A positive ion has a missing electron, so it can easily accept an electron from a negative static charge, whereas a negative ion can be a single electron or an atom/molecule with too many electrons. In both cases there is an electron available to neutralize a positive charge.

How is Static Electricity Generated?

The main causes of static electricity are:

Contact and separation is probably the most common cause of static in industry where film and sheet are being processed. It happens when material unwinds or passes over a roller.

There are 4 main areas:

It is important when handling electronic assemblies and components on modern control systems.

The main danger is from the static charge in the human body – which can be considerable.

The current in the discharge generates heat which evaporates junctions, interconnects and the gap between tracks. The high voltage also breaks down the thin oxide coatings on MOS and other coated devices. 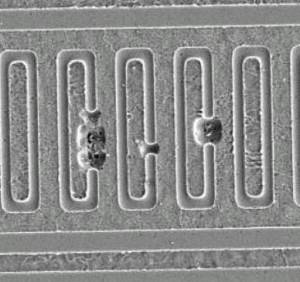 Often the component is not completely destroyed which can be even more problematic as the failure will occur later when the product is being used.

General rule: make sure that your body does not contain a static charge when handling sensitive components, either by grounding, or with ionization. 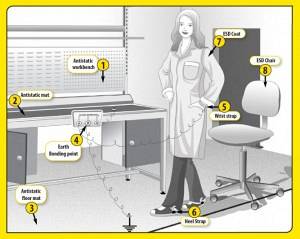 This is probably the most widespread problem in the plastics, paper, textile and similar industries.

It shows itself as:

The risk of fire is not the most common static problem in industry. But it is very important in the coating, printing and other industries where combustible solvents are used.

The most common sources of ignition in hazardous areas are ungrounded operators and floating conductors. An operator walking through a hazardous area in trainers or similar non-conductive footwear risks a discharge from his body which can cause ignition to sensitive solvents. An unearthed and conductive piece of machinery is similarly dangerous. Good grounding is essential for everything in a hazardous area.

Shocks to operators are becoming more important as health and safety issues increase in importance and scope.

Static shocks are unpleasant, but not usually dangerous, unless they cause a recoil reaction. There are 2 common causes:

Induction charging
If a person is standing in the electric field of a charged object, such as a winding reel of film, his/her body may get charged by induction.

The charge stays in the operator’s body if he/she is wearing insulative shoes until he/she touches an earthed part of the machinery. Then the charge will zap to earth giving the operator a shock.

This happens also when the operator is handling charged objects and materials – the charge builds up in the body because of insulative shoes. When the operator touches a metal part of the machine the charge can escape and cause a shock.